Photo by Grason Littles In this guest post, San Jose Jazz High School All Stars Manager Scott Fulton announces the students' holiday concert performances and program highlights.
It's a busy and exciting week for the SJZ High School All Stars! The High School All Stars (HSAS) Big Band will kick off their 2015-16 season tonight, Dec. 10, at downtown San Jose's Christmas in the Park on the Community Stage. The band, which is directed by Grammy Award-winner Dr. Aaron Lington, will perform from 8–9 p.m., rain or shine, so bundle up and let the HSAS keep you warm with some

wonderfully uplifting tunes. On Saturday, Dec. 12, the Big Band will be playing at the 20th Anniversary of Season of Hope at the Cathedral Basilica of St. Joseph. It's a very special year for us as San Jose Jazz was one of the original series organizers way back when, so on Saturday we'll get to see things come full circle. Music begins at 7:30 p.m. and will feature traditional holiday favorites and fresh arrangements of jazz standards.
The U19s, a breakout four-piece combo comprised of advanced HSAS student musicians, will be appearing on Sunday, Dec. 12, from 3–4 p.m. on San Jose Jazz's new Boom Box stage at the TiVo Santa Run Silicon Valley. This year's U19 combo is absolutely stellar. They'll be playing a mix of upbeat standards, new takes on contemporary classics, and maybe even a few original compositions at the corner of The Alameda and Cleaves Avenue. The U19s also performed to a very enthusiastic audience at the 2015 Western Museums Association Conference after party on the SJZ Boom Box in October.
A record number of students auditioned for The HSAS program this year. Such a great a pool of talented musicians motivated us to expand the program to include "alternate" positions on each instrument in the Big Band. Students that were selected for an alternate position participate in all weekly rehearsals and fill in at HSAS performances should the primary member not be available. This has allowed more students then ever to be part of this great program. 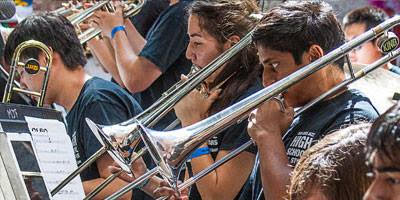 In another first, the HSAS Combo expanded its repertoire and performed funk sets to rave reviews at the SJZ Summer Fest Kick-off Party and B#SV! (Be Sharp, Silicon Valley!), a fashion show benefitting San Jose Jazz and the Silicon Valley Education Foundation. The SJZ High School All Stars is a regional, audition-based music education program for students who are interested in the study and performance of jazz. The program includes a large ensemble and a combo. It’s designed to help students achieve a mastery of improvisation techniques while advancing their knowledge of music theory, arranging, composition, performance, and jazz history. Graduates of the SJZ HSAS program have gone on to attend Berklee College of Music, Eastman School of Music and other top universities and conservatories.
For additional information about the HSAS program and news about upcoming events, please visit the SJZ High School All Stars page on our website. San Jose Jazz’s education programs are supported by Southwest Airlines.