Four years ago, when I attended the 2011 San Jose Jazz Summer Camp at Archbishop Mitty High School, I was one of the few guitarists at camp who knew the major and natural minor scales; accordingly, I was assigned to the New York Big Band and the best combo in the camp -- a memory that never fails to amuse me. Out of all my memories at Jazz Camp, there are a few that stand out in my head: being lost in the chord changes of Stardust (Hoagy Carmichael) in big band, watching the 12 bar blues magically transform into Blues for Alice (Charlie Parker) on the whiteboard in theory class, and watching in wonder as the drummer in my combo busted out a killer solo on The Gift (Roy Hargrove). 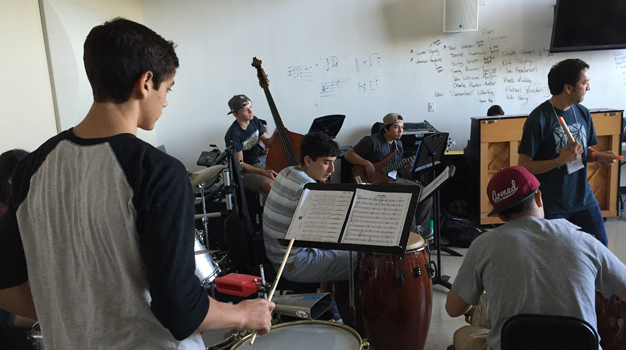 I was thrust into a whirlpool of chord changes, bar lines, and driving rhythms -- and as a short, high-voiced, seventh grader among professional high school musicians, I was eager to prove that I belonged there. So I did my best to learn voicings instead of simple bar chords, to improve my dexterity on my soloing, and most importantly, to finally understand the inscrutable world of harmonic analysis. And at the end of camp, I remember nervously waiting in the green room for the one-minute window in the five-song set when I would have to solo on the spot, with only two weeks of experience with jazz. When I finally got on stage, surrounded by high schoolers who were talking and laughing because they'd performed like this a million times before, I played the chords, I stayed on beat, I soloed, and I stuck to the arrangement. My most powerful memory from that year is not the applause I received afterwards, but the subtle nods I received from my bandmates that made me feel talented and proud. 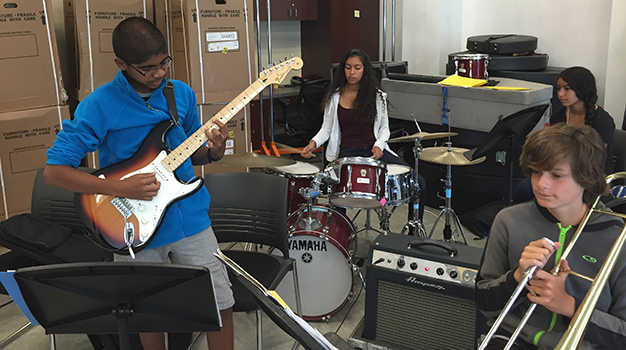 Fast forward to 2015 -- I was a marketing intern for San Jose Jazz, the same organization that introduced me to jazz and changed my life in the process. On the second and third week of summer, every year for the past four years, I had been immersed in jazz for eight hours a day -- but not this year. This year, I was working the entire summer -- business internships, college apps, summer classes, the standard stuff. And on the week of the 18th, when I finally caught a break from working on Summer Fest, I realized how much I missed being at camp when I saw pictures of my old jazz camp friends on a Snapchat Story -- an unlikely catalyst of nostalgia, no doubt about it. So when my boss asked, ever so casually, if I wanted to visit, I jumped at the opportunity and volunteered to take photos and videos. On Thursday, June 18th, I visited Day 4 of the 2015 San Jose Jazz Summer Jazz Camp @ Valley Christian. 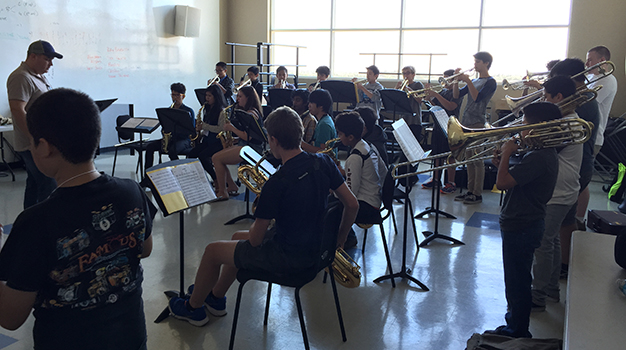 It felt so strange to drive myself up to Valley Christian High School, after years of being dropped off at the Mexican Heritage Plaza in San Jose. It felt so strange to talk to faculty, many of whom I had learnt from in previous years, knowing that they wouldn't be giving me advice on my phrasing choices in an hour. It felt so strange to peek my head into each classroom and see scale positions, names of famous Latin jazz pianists, and the immortal circle of fifths scrawled on whiteboards, knowing that I wouldn't be making sense of a John Coltrane composition in a few minutes. What I saw at camp was a collection of my memories, removed from my brain and transplanted in a strange new setting. The guitarist who made the Hristo face, indicating perfect synchronicity between instrument and expression -- the bassist with the red electric bass who lost time trading fours because he was so absorbed in his phrasing -- the drummer who spent the fours developing one fill and finished the tune with a subtle smile -- the trumpet player who fearlessly declared that he would solo, with a confidence voice that belied his age, when John Worley asked for volunteers -- the vocalist who gave her part to another singer so the sound of the ensemble would be more balanced -- those split seconds reminded me that I was home. That's what Summer Jazz Camp was for me -- a home away from home. A place where I could play the sentimental stuff in my head and be respected for it. A warm environment where I dreamed of being a musician, where I made friends, and finally felt like I belonged. I didn't look back when I drove away from camp. I had to stay focused, keep moving forward, keep driving, or I would never have left at all. I felt confident that I could succeed outside of camp, but part of me wanted to stay there forever -- to stay a kid forever. My seventeenth birthday is next Friday, the same date as the final concert for Summer Camp -- and I don't believe in coincidence.