In this guest post, Progressions Director Julie Rinard updates readers on all that she and her team have been up to recently. Below, she updates us on the program's instrument drive and newly-implemented instrumental component. She also recaps a recent visit Winter Fest 2014 artists La Santa Cecilia paid to the Progressions students and parents before their performance later that night. The instrument component of Progressions is officially up and running! Thanks to your support, 67 4th, 5th and 6th graders at Santee Elementary, Jeanne R. Meadows Elementary and Success Academy (all in the Franklin-McKinley School District) are receiving small group instrumental instruction twice a week. Clarinet, flute, trombone, and trumpet are currently being offered. This, together with the 50 2nd and 3rd graders we have been working with since last fall, brings the total number of 2013-14 Progressions students to nearly 120. Much of the legwork was done last fall by instrument donation drive coordinator and Progressions teacher Matthew Fredericksen, who identified and secured dozens of donated instruments. From there, Matthew turned to eBay and Craigslist to fill in the gaps.

My unforgivable sin in the instrument drive phase (at least according to my beloved husband) was listing my home as the shipping address for the instruments. Over the course of December and most of January, box after box appeared at my door step. My three year-old son loved imagining what was inside each box and quickly caught on to the fact that the packages were “instruments for mommy’s students.” My husband, on the other hand, cared about one thing only: when the classes would start so he could reclaim his living room. After Matthew and I unwrapped, tagged and recorded serial numbers for all the instruments, Robert Zacher from Quicksilver Repair loaded everything into his truck (while my husband celebrated in the background). Bob worked tirelessly day and night to get all the horns refurbished and cleaned by January 28, the day we promised students we would assign instruments. 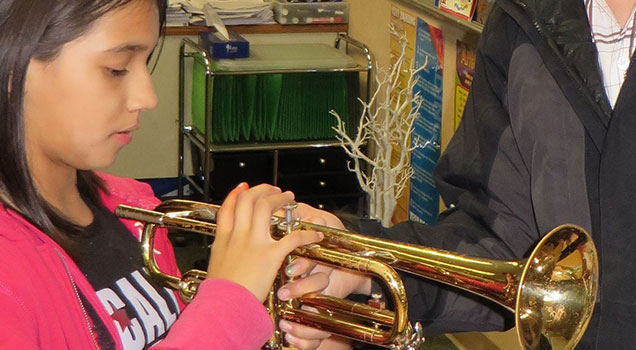 In addition to getting the instruments ready to play, we had to recruit students for the program. We did multiple forms of outreach during December and January to get the word out. On January 13, our first outreach success came when San Jose Jazz partnered with the Steinway Society of the Bay Area to treat students at Jeanne R. Meadows Elementary and Success Academy to a live performance by internationally acclaimed piano duo Anderson and Roe. The hip, quality live performance gave Progressions staff an opportunity to help students make the link between music education and performance. Over 50 program applications were received between the two schools and several students attributed the performance to their decision to enroll. The upper elementary students at Santee Elementary School received a different but equally motivating flavor of high quality performance on January 16, when a local combo comprised of Matthew Fredericksen, Danny Gerz, Andrew Hill, Gary Ortega (also a  Progressions teacher), and Oscar Pangilinan performed live on the blacktop.  San Jose Jazz looks forward to engaging young, committed community members through similar Progressions collaborations in the future. 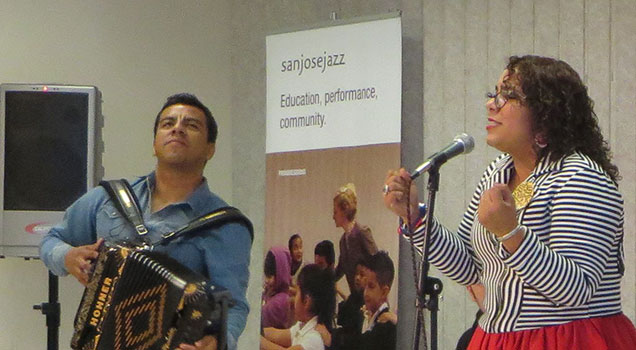 Just a few weeks back, Grammy® Award-winning Latin band La Santa Cecilia performed for 125 Progressions students and family members just hours before playing to a sold-out crowd at Winter Fest 2014 a few weeks ago. In between songs, they spoke of their own musical journey, their bi-cultural roots, immigration reform, and their perseverance to overcome obstacles in the face of adversity.  As the band infused the cafeteria and neighborhood beyond with the unrestrained joy of music and the spirit of social activism, I knew that Progressions was finally beginning to find its groove. For more info on Progressions, please the Progressions page on our website. To learn about the many education programs San Jose Jazz provides students and burgeoning musicians in its community, please visit sanjosejazz.org/education.  San Jose Jazz's education programs are supported by Southwest Airlines.