As San Jose Jazz’s in-house blogger, most of my work is done in the three or four weeks leading up to the festival, whether it’s through spreading the word via social media or speaking to artists directly so our audience can become more acquainted with whom they’ll see in San Jose. This year, I had the pleasure of speaking with Miguel Atwood-Ferguson (twice), Moses Sumney, and all members of La Santa Cecilia. Every act had great insights that helped me better articulate their musical purpose. But what happened when it was finally show time? I was running around trying to document as much as I could, and here’s a run-down of Winter Fest 2014, from my perspective: 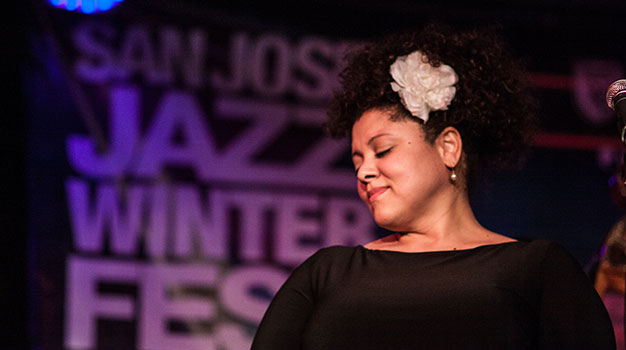 San Pedro Square Market was the place to be for zydeco fiends Friday night. Jeffery Broussard and the Creole Cowboys, at their peak, had multiple attendees on their feet. Those who weren’t at the Market had ascended the stairs to Theatre on San Pedro Square to see Bay Area vocal powerhouse Kim Nalley, who seduced the crowd with her seductive nuance and raw power. Later in the evening, bass whiz Stephen “Thundercat” Bruner performed with an ensemble that included his brother, Ronald Bruner, Jr, who’s backed such luminaries as Dianne Reeves, Ron Carter and Wayne Shorter. Their brotherly connection was quite pronounced during both their 9pm and 11pm performances, especially during 11pm set highlight “Lotus and the Jondy,” featuring a drum solo from Ronald even more aggressive than the apocalyptic cymbals and snares heard on Thundercat’s record, Apocalypse. Saturday headliner Miguel Atwood-Ferguson was among the eager ears in the Thundercat crowd. As he told me, he had played with Thundercat before but had never seen him do his own thing as a bandleader. He was excited to finally get the chance to sit back and watch. Atwood-Ferguson was incredible engaged with his audience during his talk back the next day. He was receptive to every question, and even spent a fair amount of time afterward with anyone who had inquiries once the talkback officially closed. That transparency shifted to an incredibly deep focus during his 8pm and 10pm sets. As he noted to the crowd, it was a pleasure for him to play some of his original compositions, though he’s often known for interpreting the work of others. Dilla fans were treated to selections from Atwood-Ferguson’s celebrated Suite for Ma Dukes, and Oakland vocalist Mara Hruby made two short, yet enchanting, appearances with Miguel that were a dream come true for her. 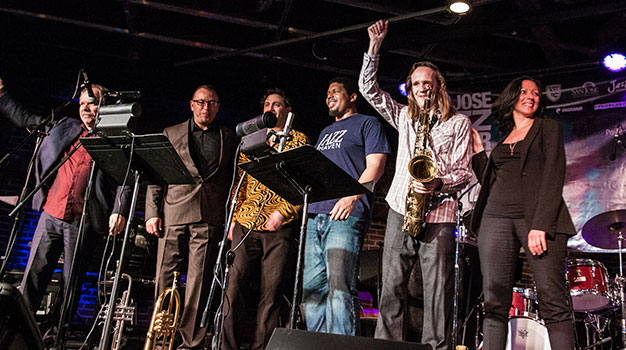 On Sunday, we were lucky enough to feature Amina Figarova’s whole sextet as part of our talk back, and the ensemble provided a teaser of what listeners could expect at their 2pm performance. Figarova spoke on her musical beginnings and her band members outlined differences between the jazz scenes in New York and Amsterdam. During the performance itself, the audience was treated to a delightfully melodic interplay that featured a center stage attack of flute, trumpet, and sax. Though her ensemble was well short of a big band, Figarova’s sextet provided nuance and layers that showed just how special this group can be with an extended cast. Though still a relatively unknown commodity, Moses Sumney played to a healthy crowd of people inside Theatre on San Pedro Square Sunday afternoon. Many attendees, including San Jose Jazz staff, were eagerly awaiting this particular set. Sumney proved to be incredibly charismatic, imploring a fascinated and engaged audience to hang on to his every word. The majority of his set was a duo performance, though his last few tracks – his most memorable -- showcased his solo looping skills. His closing track included audience participation as he scatted to his listeners’ maintained heartbeat. As he mentioned in his interview with SJJ, audience engagement is incredibly important to him, and at that point, he had broken the fourth wall and invited each participating listener into his band. His support didn’t let up until asked to soften their claps. When it was time to scamper off stage and head back to LA, he was greeted with a standing ovation and a number of audience members (myself included) showering praise on a star at just the start of what should be a long, healthy career. Artistic Director Bruce Labadie was overheard saying it may have been one of the best performances we’ve ever hosted.

After such an emotional show, maybe it was key to close things out with a little bit of light-hearted fun. Nikki Hill and her band closed out Winter Fest with plenty of sass. She was another great voice to behold, the proper way to end a weekend of locals and world travelers, classical pianists and punk rock bassists – the impressively eclectic (and promising) future of jazz. On Saturday and Sunday afternoon, we also hosted six of the best student jazz groups in the region. In addition to presenting some of the best emerging jazz talent at Winter Fest, we utilize Summer Fest’s “cool” counter point to shine a light on jazz’s next generation of talented artists. For attendees interesting in hearing big bands with plenty of brass, this was the place to be, especially when the San Jose State University Jazz orchestra, led by High School All Stars Music Director Aaron Lington, took the stage. With a bandstand that included five trumpets and five trombones, all of whom sounded like they could’ve been first chair according to our Director of Education Harley Christensen, this ensemble may have been the most powerful presence of the weekend. 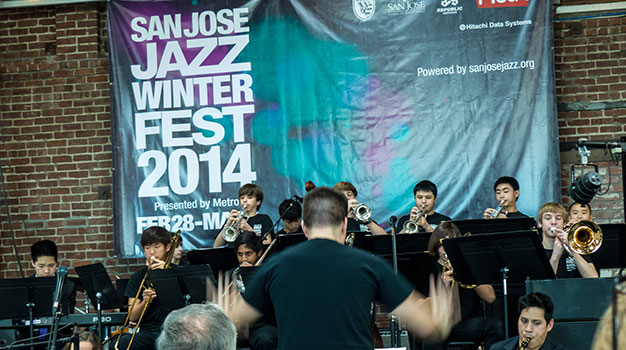 In short, what did I see? Three standing ovations, for Thundercat, the Amina Figarova Sextet, and Moses Sumney. Hopeful audience members waiting downstairs to see if someone would walk out of the more-than-sold-out Saturday afternoon engagement with the Anton Schwartz Quintet (I wanted to see how the capacity crowd was enjoying the show, but feared it might lead to the Fire Marshall making an appearance). The largest single audience I’ve ever seen inside San Pedro Square Market’s garage space, all to see recent Grammy® winners La Santa Cecilia. Friends and families enjoying celebrated student groups from all around the region Saturday and Sunday afternoon. A spontaneous dance party breaking out after Thundercat slayed his 11pm set. And, thankfully, lots of satisfied faces at all of these events. 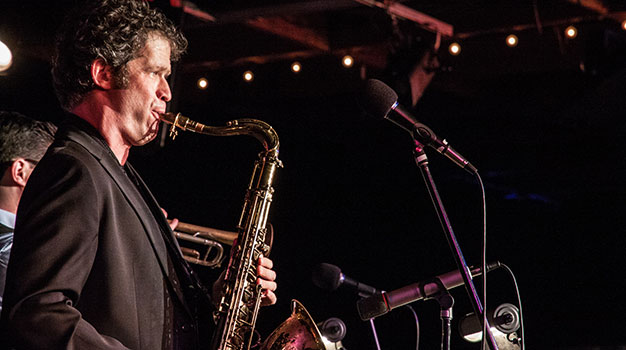 I’m also left with some “behind the scenes” moments that will remain with me well after the drop of the curtain. I think of how generous Taylor Eigsti, Miguel Atwood-Ferguson, and Amina Figarova (and her entire sextet) were with their time and answers during our talk backs. In particular, I remember how, as the crowd inside the Hedley Club dispersed after Eigsti’s talk back, a few of our High School All Stars asked if he would be willing to jam. He looked at his watch, and noting he had a few minutes to spare, happily obliged. I’m sure it was just another moment for him, but it must have meant the world to those All Stars. He also had very kind words for an up-an-coming pianist who was playing with the Kuumbwa Honor Band on Sunday, noting in the lobby of the Hotel De Anza that, if he had time the next day, he would definitely drive down to watch the performance. We hope you enjoyed at least one of the great moments Winter Fest brought to downtown San Jose. If you weren’t on hand to hear the news, we made mention of a few acts who will be in San Jose for Summer Fest 2014, our fest’s 25th anniversary. Bootsy Collins, Con Funk Shun, Snarky Puppy and Pedrito Martinez are all confirmed, and we will announce more names as they’re added to the bill.  San Jose Jazz’s education programs are supported by Southwest Airlines.